The advice from Principal Patrick Sivori and Math Specialist Megan Tillery of Alex R. Kennedy Elementary School in Louisville, Kentucky, is similar to that of many veteran Eureka Math® users.

Do the work. “Are your teachers willing to dedicate the time to plan the lessons?” Sivori asks. “I worked in high school for 11 years, where you can wing it sometimes. With elementary school students, you need to engage them all the time.”

There are no shortcuts. “With a lot of curricula, you can look at a lesson for 5 or 10 minutes before class and get by. You can’t do that with Eureka Math,” says Tillery.

Expect year one to be challenging. Teachers, students, and
parents grapple with using deeper, more conceptual ways to learn math beyond just mastering the algorithms.

But Kennedy’s results are anything but typical. For instance, Grade 5 students who began with Eureka Math in Grade 3 raised their proficiency/distinguished scores on state tests by 17 points over the past three years. The percentage of Grade 5 students scoring at the lowest level (novice) dropped more than threefold during the same period, from 22 percent to 7 percent. 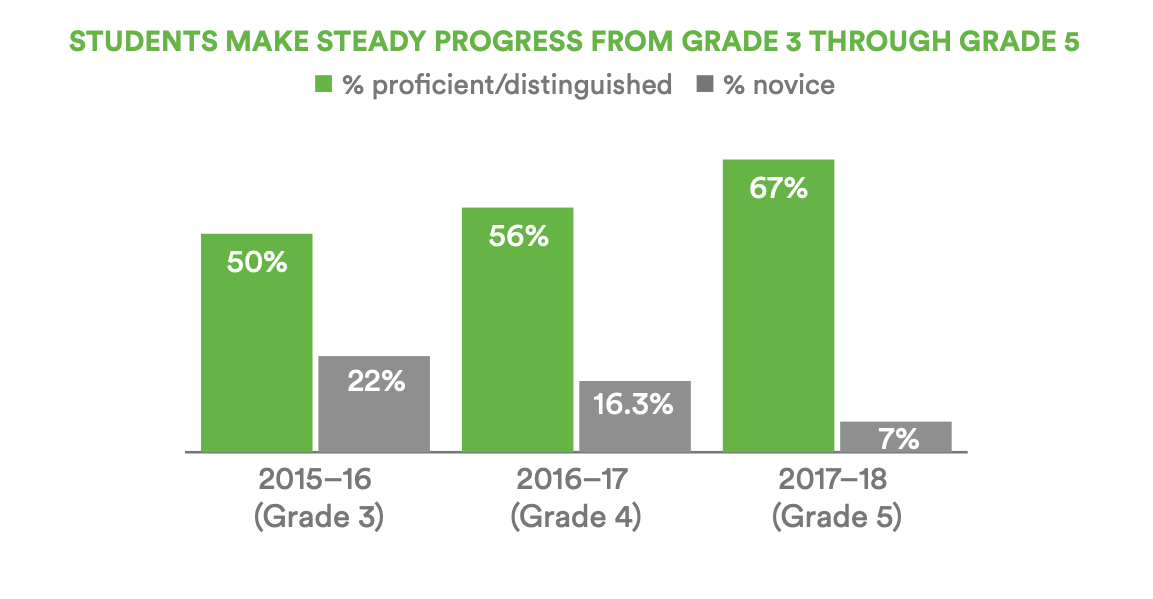 The results are garnering attention. The city’s flagship newspaper, the Courier Journal, profiled the school’s success in an article titled “This ‘crazy math’ is delivering astounding results for one JCPS school.” In observing classrooms, the reporter found that “rather than encouraging memorization, Kennedy’s teachers prompt students to grow their understanding of math concepts. During the class, students apply their new knowledge to multistep problems. At the end of each lesson, teachers lead a class discussion, allowing students to talk through what they’ve learned.”

The school’s journey began four years ago when Kennedy’s previous principal researched different math curricula and found EngageNY Math (the original version of Eureka Math that Great Minds® created
for New York State). He and many of his peers were frustrated by the district’s approach to math: a curriculum map that, according to Tillery, encouraged schools to use “10 lessons from Module 1, eight from Module 11, and so on.”

“Teachers were jumping all around in order to align with the district,” recalls Tillery. “It was insanity.” The school wanted a more coherent curriculum.

By the 2015–2016 school year, Kennedy and two other Jefferson County schools had gotten permission to use EngageNY Math/Eureka Math for all their math instruction. Tillery says that made teachers very happy, although their enthusiasm was tempered by the district requirement that teachers use both Eureka Math’s end-of-module assessments and the district’s own measure.

"It takes a lot of day-to-day planning to teach the correct way. Year one is hard. It requires a mind shift. But it gets a lot easier in year two."

Things improved further during the 2016–2017 school year, when teachers received more professional development. They learned how to effectively customize lessons and were seeing their students succeed.

Plus, parents were becoming more comfortable with the “crazy math.” “Parents having online access to all the lessons helped a lot,” says Tillery. “Instead of shutting down or being frustrated, they could learn along with their children.” In many cases, the students were teaching their parents how to work the problems.

Now, the school’s primary challenge is to maintain and build on the gains. Although the district provides no professional development, Tillery has organized support at the school level. Teachers meet in grade-level professional learning communities every month to discuss the key skills for each module and work through end-of-module reflections. She also provides two to three weeks of small group support to students who are struggling with some concepts.

“It takes a lot of day-to-day planning to teach the correct way,” says Sivori. “Year one is hard. It requires a mind shift. But it gets a lot easier in year two.”

According to Sivori, more schools in the district are beginning to use Eureka Math this year. So although the district administration can’t afford to provide support for all curricula, for the first time ever, it is expected to provide districtwide professional development for Eureka Math next year.

“Since the district recognizes its limited capacity in supporting a variety of mathematics curricula – we believe it is essential to gain greater focus and provide strategic support through professional learning opportunities for a fewer number of mathematics curricula,” says Felicia Cummings Smith, the district’s assistant superintendent of academic services. “This will improve implementation, strengthen teacher efficacy, and enhance student learning outcomes.”

Math Proficiency on the Rise in Detroit Public Schools

Steady Gains for this Early Adopter of Eureka Math®